Top Priority Hunting was around long before it was given a name. It is comprised of four guys with the shared passion and love of God, family, hunting, and filming. A couple of the guys, who had been hunting together for years, documenting their hunts on film and in journals, went to a Full Draw Film Tour in 2013 in Boise, Idaho. It was then that they decided they needed a name, and within weeks, Top Priority Hunting was born. It was later that fall that they completed their first film, and since then, many more have followed, including hunts all over the Northwest as well as South Africa and Newfoundland. They are a group of guys who make it their "top priority" to capture every aspect of the hunt. Engaging, emotional, and inspiring clips are what they strive for in their film productions. It is their goal to work harder today than they did the day before, showing the hunting experience from beginning to end, including the trials, hardships, humor and the fulfillment of the harvest. Filming their hunts has made it possible to bring home footage and share hunting experiences in the highest quality, both in their homes and on the big screen. Through the adventures they have faced as a team, both on and off the mountain, they have truly become a family, each bringing their own strength and style to the pursuit. Respecting the sport, Justin, Jeremy, and Garret all pride themselves on sharing real DIY backcountry hunting. They are honored to be a part of the Full Draw Film Tour. 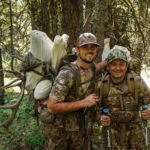